Our stores are reopening, see our new ways to shop Book a Styling Appointment
Summer Sale ending soon: get an extra 10% off with code SUMMER10. Click here

The first time you wear a Turquoise gemstone makes it plainly obvious why it has played such a significant role in the jewellery fashion habits of many of the world's major civilisations.

From the Persians to the Ancient Egyptians to the Native Americans, its striking blue hue with rich varieties of brown and black veining - also known as the matrix - has caught the eye of many a discerning lover of high-quality gemstones.In fact, its visual appeal is so great that it has been the source of many spiritual belief systems throughout the centuries.

Read our blog about the history of Turquoise here.

The semi-precious gem that was designated a birthstone for December, along with Zircon and Tanzanite, has been discovered in practically every corner of the globe. Here are some of the most fascinating facts that this historic, widespread mining has unearthed about the Turquoise we all know and love:

1. Turquoise is the only gemstone to have an official colour named after it

The vibrant appearance of pure Turquoise is so pleasing on the eye that it has been ordained an official colour in itself - a privilege that no other gemstone in the world has had to this day. It's instantly recognisable and perfectly versatile to be the kind of accessory that you can put with almost any outfit.

Read our blog about how to wear Turquoise here.

2. Turquoise can range in colour from bright blue to Tibetan green

The Himalayan ground in which Turquoise is found by Tibetan miners gives it a distinctive greenish colour, which makes Tibetan Turquoise world-famous and highly desirable. Conversely, the gemstones that are found in Persian and Egyptian mines are much bluer in colour with less obvious veining on their surface when they are cut and shaped for jewellery. The variations in colour and veining across the world occur because of the different levels of copper and aluminium present in the water that flows through the rocks in which it is formed.

3. It is known as the 'Sky Stone' by Tibetan and Nepalese people

Turquoise has been revered by people in the Himalayas for thousands of years thanks to the belief that it came from the heavens above. Its eye-catching blue-green colour is thought to bring protection to everyone who carries it on their person, which is why children in Tibet are gifted the gemstone in their early years to keep them safe on their journeys through life.

4. It's easy to spot the difference between Turquoise and a fake Howlite imitation

The common white mineral, Howlite, is very absorbent and can be dyed to resemble any coloured gemstone that has similar webbing, so it is commonly used by disreputable dealers to create fake Turquoise gemstones.

Fortunately, you can easily tell the difference between dyed Howlite and genuine Turquoise. All you need is a cotton bud and some acetone. Dip the bud in the colourless liquid and rub it gently on the surface of the stone for a few seconds. If this removes any blue-green colour dye from the stone, it is clear that it is, in fact, Howlite and not Turquoise.

All of our stones at Monica Vinader are ethically and expertly sourced from historic mines in the United States and we cut them from the rough so the purity of their colour shines through when they get set into jewellery.

Ancient beliefs were that Turquoise changed colour based on the likelihood of impending danger to the person wearing it; it was believed to be a sure-fire way of knowing when to seek cover or protection or to make a change in your life.

As romantic as this might be, a more modern understanding is that prolonged exposure to direct sunlight, cosmetics and heat can cause the colour of a Turquoise gemstone to change. This can be avoided with care and attention by cleaning your gemstone with a soft cloth from time to time, making sure to only wash it with water to avoid affecting the vibrancy of the porous stone. 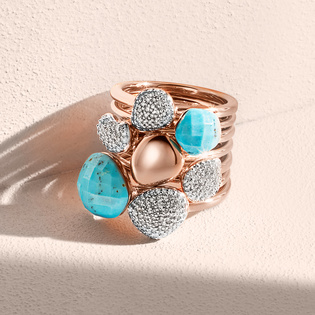 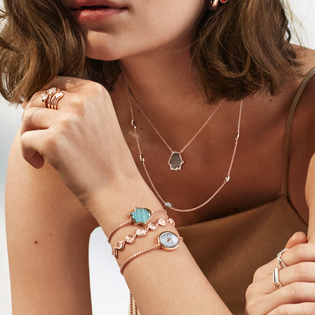