What is a Signet Ring?

Signet rings are a classic band that has seen a resurgence in modern times and so you may have asked yourself this question. Traditionally a masculine piece of jewellery, signet rings have become a popular style among both men and women. Historically worn by royalty, these unique bands have transitioned over time into what we know and love today. Perfect for adding a touch of class and sentiment to your jewellery collection, understanding this ring design is key to wearing them with confidence.

The History of the Signet Ring

When exploring what a signet ring is, we must delve into its historic past. Originally used as a 'seal,' signet rings played a very important role in business and politics within early civilisations. During the 10th century, these types of rings were often used to authenticate documents. Royals and nobility would have their family crest, coat of arms, or other design, solely unique to them, engraved on their rings to act as a 'signature' on important documents. They did this by pressing the engraved side of the band into melted wax. Due to these royal beginnings, signet rings were seen as a mark of wealth and class.

By the 13th century, these personalised rings had made their way down to the freemen of society - these were the people who enjoyed civil liberty. What a signet ring was didn't change much. As they used them in much the same way, as a way to sign official papers. As this gold jewellery being seen as a mark of authentication, signet rings were often destroyed when their owner passed away.

Since the middle ages a signet ring's definition has evolved. From taking centre as an aesthetic piece to show class and nobility. To the modern day, where they can be worn as a fashion statement. This jewellery has evolved from a traditionally male jewellery item, to both men's and women's signet rings being popular in today's age. The use of a signet ring has changed much since its beginnings. Many families choose to pass these jewellery pieces down the generations as an heirloom. Whilst many people receive their very own personalised gift in the form of a signet ring on their 21st birthdays. But despite their current popularity, they cannot be used to legally sign documents in current times.

The historical meaning of 'signet' is that of 'a small seal.' This engraved jewellery was generally used for sealing papers, letters, and important documents by the upper echelons of society. On account of this, signet rings were often referred to as 'gentlemen's rings.' Since their start, they have grown in popularity in women also.

In modern times, what a signet ring is has changed. Often given as a coming of age gift, at either 18 or 21, they symbolise a moment in an individual's life. In particular, the cross from childhood to adulthood. Much like the meaning of eternity rings, and the meaning of promise rings, this makes signet rings a very sentimental piece for a vast number of wearers.

The Design of a Signet Ring

To know what a signet ring is, you must first know how to identify one. Signet rings are characterised by a raised, flat surface that sits above the rest of the ring. This surface normally houses an engraving, from a person's monogram to their family crest. Commonly they will either be cast in gold or sterling silver, but can also be rose gold.

Which Finger to Wear a Signet Ring On

When it comes to rings, we often wonder which finger they should be placed on. With engagement rings, wedding rings, and eternity rings having a specific finger, you may wonder if signet rings do too. This classic piece is traditionally worn on the pinky finger, but it does not have to be worn here. Instead it could be worn as a statement ring on the thumb or any other finger - it's all up to how you prefer to style it.

Once you know what a signet ring is, you may be intrigued by this historical item. No longer representing nobility, these rings can be a gorgeous piece that anyone can own and wear. As there are no rules as to who can wear these classy bands, if you'd like to own one you can!

When engraved, a signet ring becomes completely one of a kind to its owner. For those who enjoy sentimental jewellery, there is no better choice. This engraved piece entirely represents the person who is wearing it, whether that be through a monogram, or a special anniversary date. What to get engraved on your new jewellery is your decision alone. What a signet ring is, is entirely down to the owner. So if you would like to adorn a ring that holds symbolic meaning for you, then this style would be ideal.

Measure ring size at home means you'll be able to choose the correct size whilst ordering, so you can enjoy your new ring from the moment it arrives! Explore our ring size guide to find your perfect fit.

At Monica Vinader, we have a beautiful range of silver and gold signet rings. Our designs put a modern twist on the classic shape. Our engravable options allow you to make your piece personal to you. Whether you choose to have your own initials engraved, or a lucky number, these wearable rings will become an essential part of all your ensembles. What your signet ring is and means is entirely up to you.

Ethics is at the heart of everything we do which is why we sell sustainable rings crafted from recycled silver and gold vermeil. Using these metals, recyclable packaging, and being carbon neutral means you get the best quality for the lowest impact on the planet. For those wishing to opt for a ring encrusted with gemstones, we only use ethical and conflict free diamonds.

Pairing wearable design with ethical materials, we create jewellery to bring confidence to your day. Our collection of pearl jewellery, helix earrings, and studs are sure to elevate your style to the next level. 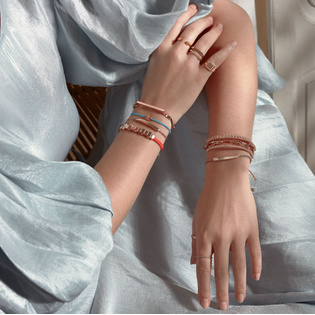