Tibet is famous for its incredible artwork and jewellery inspired by deep religious beliefs. It has used gemstones for centuries to heal and protect people and connect them with their deities, so stones like Amethyst have played and still play a huge role in the Tibetans' desires to communicate this and share it with the world.

With the Himalayas being the literal 'doorstep', there is no shortage of beautiful gemstones for Tibetans to mine, so let's find out more about one of the most striking semi-precious stones to come out of this region of the world, the Amethyst.

Amethyst is a semi-precious gemstone that can be found in volcanic geodes all over the world. Its deep purple hue is instantly recognisable even cut from the rough, despite the fact that it is quite often different depending on which continent it hails from.

The heights of the Himalayas are perhaps one of the most fascinating locations in which Amethyst has been mined, especially when you consider that the age of the rock that forms them could be anything between 55 million and 500 million years old.

Why was Amethyst so popular in Tibet?

As a member of the quartz family of minerals, Amethyst has always been held in high regard in Tibet, where significant deposits of quartz can be found in the Ganesh Himal mountain range, which is a sub-range of the Himalayas that lies between Tibet and Nepal.

Tibetan quartz is believed to be one of the oldest gemstone formations on the planet, as it is often found and mined (by hand) at altitudes of up to 15,000 feet. It is thought that monks historically trekked up the mountains in the warmer months of the year to collect the gemstones themselves (in the absence of machinery, of course), so its value was even greater.

Given its altitude, too, many revered it amongst other quartz crystals as the 'eyes of God', so it was ultimately thought to be sacred to the Buddha. Moreover, the Ganesh Himal peak in Nepal gets its name from the Hindu Lord Ganesha, so the religious associations of the gemstones found on its slopes were and still are firmly part of Tibetan culture.

What was Amethyst used for in Tibet?

Amethyst's close associations with the Buddha meant that it was most frequently adopted as the chosen gemstone for prayer beads, otherwise known as 'Malas'. These would typically take shape in bracelets that would be worn on the wrist when not in use, but when the time came to pray or meditate, they would be used to count through the number of times a mantra was recited.

The gemstone was also widely used for similarly relaxing techniques such as yoga, thanks to its protective and restorative qualities. Wearers had a penchant for its deep, transfixing colour and believed that it would help them restore balance in their lives and ultimately facilitate mindfulness in its ancient form.

It wasn't only used for this process of mental healing, though; many Tibetans believed in its abilities to heal physical wounds, so it was used in collaboration with the medicinal practices of the time, much like other gemstones like Moonstone and Turquoise.

Where else was Amethyst popular?

The amazing Amethyst has enjoyed religious associations and spiritual qualities around the world for centuries. It is particularly abundant in the South American countries of Brazil and Uruguay, whilst it was also hugely significant in Ancient Greek and Roman societies.

Thanks to these historical associations, it remains one of the most admired gemstones of the world in the 21st century, so you can still experience its otherworldly qualities in your jewellery today.

Our Amethyst gemstones are sourced by experts and cut from the rough, so the finished articles you see in our silver and gold jewellery will be wonderful additions to your collection all-year-round. 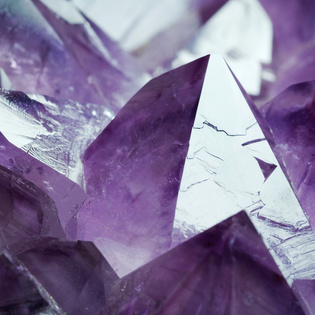