Baroque Pearls: Everything You Need to Know

Baroque pearls are irregular shaped and unique pearl. They are a popular gemstone for modern jewelry due to their lustre drawing the eye and makes for a truly elegant addition. Our guide delves into exactly what baroque pearls are, where they come from, how they are formed, and how to wear them.

The Origins & Meaning of Baroque Pearls

Baroque pearls are any pearl that has an imperfect, or non-spherical, shape. They come in a vast range of shapes, sizes, and colours and can be used to craft modern pearl jewelry. Baroque gems get their name from either the French word 'baroque' which means irregular shape, or from the Portuguese 'barroco' which means 'irregular pearl.'

The lustrous natural gemstones do not originate from a singular place, as baroque pearls simply refer to the shape, they can come from anywhere in the world. Due to how each type of pearl is formed, baroque pearls are more common in freshwater than spherical stones and so tend to be more affordable.

How Are Baroque Pearls Formed?

The formation of baroque pearls begins much the same as their symmetrical counterparts. An irritant enters the mollusk where it goes on to become the nucleus of a pearl. The oyster secretes thin layers of nacre which coats the nucleus and build up over time to create the pearl. A baroque pearl is formed when these layers are non-uniformed, leaving us with a gorgeous and unique gem.

Many people believe that a grain of sand can be the irritant to start this process, however this is not the case. Which is why natural pearls, formed without human intervention, are quite rare. However, some types, such as the Keshi pearls we use in our Mother of Pearl collection, do not need a nucleus to form but these are equally rare and so are valuable. Cultured baroque pearls are formed when a nucleus, such as a small piece of shell, is inserted into the oyster's muscle to start the process.

The Different Types of Baroque Pearls

As baroque pearls is an umbrella term for all irregular shaped stones, there is a vast array of types within this:

Perfectly spherical and round pearls are rare, whereas baroque pearls are more abundant. This means that they are the more affordable option when it comes to this lustrous gem, making them incredible for statement jewelry that doesn't cost the world.

The one of a kind shapes of baroque pearls makes them ideal for glamorous and striking jewelry. Our pearl jewelry uses a stunning range of culture freshwater baroque pearls that offer a mesmerizing rainbow lustre that pairs beautifully as pendants alongside gold jewelry and chains. With both Keshi and BIWA shapes adorning necklaces and bracelets, there's a piece to suit everyone's style. The lustrous nature of this gemstone means it will be the centerpiece of every outfit it adorns.

How to Clean Baroque Gemstones

When it comes to cleaning baroque pearls you should simply wipe them with a soft cloth after each wear to remove excess oil or dirt. This gentle jewelry cleaning will help to enhance their natural lustre.

As baroque pearls are naturally alkaline you should put them on after your perfume has dried to avoid damaging them with the acid contained in perfume. This will help them look their best for longer.

We combine sustainable recycled metals with ethical diamonds and gemstones to create jewelry you can wear everyday with confidence. Our helix earrings, diamond jewelry, and stacking rings. 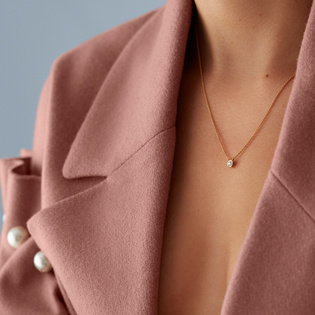 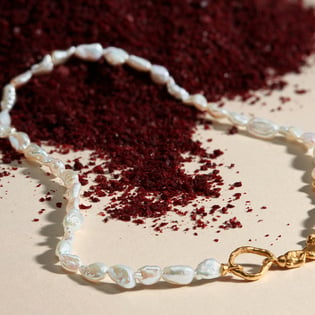