Egyptian Turquoise is so imperial in appearance that it had pride of place in the jewellery collection of many Pharaohs of the ancient civilisation. Its red, coppery webbing cutting through a distinctive greenish blue stone make it perfect to set into gold, so it was and still is amongst the most desirable jewellery to come out of the Sinai Peninsula.

Sitting between the Red Sea and the Mediterranean Sea, the Sinai is one of the world's most important historical sources of the semi-precious gemstone of Turquoise. It was so popular, in fact, that most of the supply from the mines in the southwest of the region are believed to have been used up, which is what makes Egyptian Turquoise so globally desirable today.

The translucent stone from the Sinai has the distinction of featuring dark blue discs on its surface when viewed through a microscope; by contrast, the Turquoise mined in Persia (modern-day Iran) has a bluer hue with less webbing throughout the finished stones.The noblest members of Ancient Egyptian society draped Turquoise around their necks for the protective qualities it was believed to bring, so it's no surprise that it remains as fashionable today as it was around 3000 BC.

The History of Turquoise in Egypt

The mining of Turquoise in North Africa is believed to date back at least to the First Dynasty when Egyptians sourced it from the coastal mines of the Sinai Peninsula. It's plain to see why the striking appearance of what came to be known as Egyptian Turquoise was so popular with the Pharaohs, but they thoroughly believed it brought even more to their lives than stunning pieces of jewellery and ornaments.

It was thought to be a protector and bringer of good fortune for anyone who wore it, so it was the must-have stone for anyone of note in ancient times (and not only in Egypt; Turquoise's charm had the Ancient Romans, the Aztecs and the Incas transfixed, too). The role that the gemstone played in Ancient Egyptian culture was championed by the Pharaohs who were believed to have worn it on a daily basis. Tutankhamun himself was a lover of Turquoise, so much so that a number of stones were set into his famous death mask, along with another cherished rock in Ancient Egypt, Lapis Lazuli.

The Goddess of Joy and Fertility, Hathor, was often referred to as the 'Mistress of Turquoise' as she kept a watchful eye over the miners who worked it in the south of the Sinai. What's more, the Goddess of Justice, Maat, enjoyed a strong association with Turquoise as she symbolised the togetherness of the universe, so the gemstone really was at the core of Ancient Egypt's belief systems.

The Country of Turquoise

Egyptian Turquoise was so prevalent in society that the Sinai Peninsula was affectionately known as 'The Country of Turquoise'. There were six working mines in total, with the two main sites being Serabit el-Khadim and Wadi Maghareh in the southwest.

The surroundings of Wadi Maghareh were dubbed the 'Terraces of Turquoise' by the Ancient Egyptians and its name literally translates as 'The Valley of Caves'. Upon its rediscovery in 1809, multiple excavations of the site had brought it back to working order, but the amount of Turquoise had practically depleted by the time we reached the 21st century. Pharaonic carvings can be seen there above the main caves, which are amongst the many reasons why it remains one of the most important archaeological sites in all of Egypt.

Turquoise is mined in many locations around the world; some of the other major sources can be found in the mines of Iran and the USA.

The inimitability of our Turquoise gemstone pieces is strengthened by the fact that we only use ethical sources and hold high standards for colour, clarity and cut, so each and every stone has its own unique, lasting character. 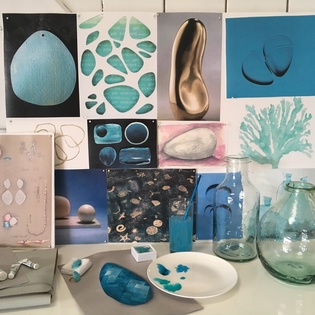